Celle Ligure is not just sea, the territory in fact climbs into the hills with its villages rich in greenery and places of cultural, historical and artistic interest.

Particularly suggestive is the path between the hills that allows you to reach the various hamlet churches.

Let's go to their discovery starting from Costa which is about 3 km from the center.

Starting from the parish church of S. Michele Arcangelo, looking at the facade of the church, go right and go up along via Lanza or Via Risso and reach via Alla Costa: at the top of via alla Costa you will find the Chapel of San Giovanni Battista and Santa Lucia dating back to 1600 and whose churchyard is made with sea pebbles. 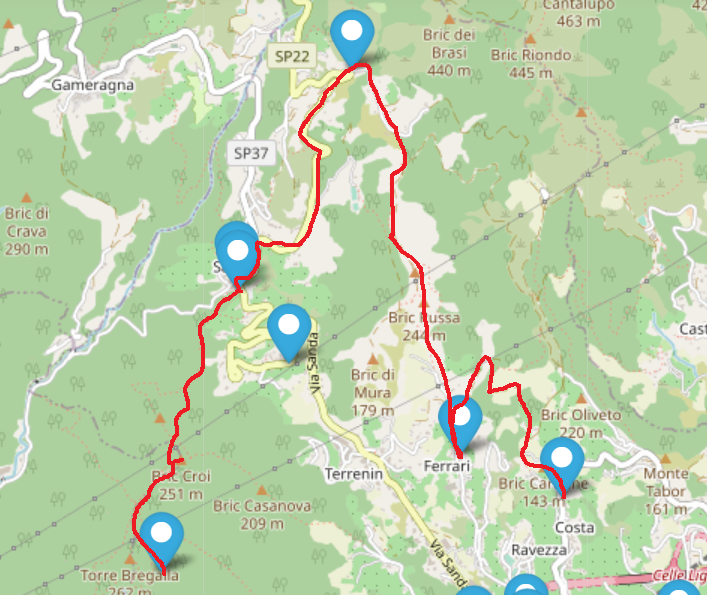 Looking at the façade of the church, it is possible to see a path on the left that passes through the houses: this path allows you to reach the “Costa Ferrari” public road, which crosses “Pensei” and allows you to reach Via Ferrari. Going down towards the sea for a few tens of meters, you arrive at the Chapel of San Lorenzo and Sant'Antonio Abate. The church square is an excellent place to enjoy a breathtaking view and to fill the water bottles with the fresh water of a public fountain.

The itinerary among the fractional churches continues climbing up to the end of Via Ferrari: at the end of the road the public path Brasi-Terrabianca-Ferrari begins, which allows you to cross the suggestive Terrabianca area, surrounded by greenery.

The path joins Via Terrabianca, following which you arrive in Via Brasi.

Exactly at the intersection of via Terrabianca and Via Brasi you will find the indications relating to the ancient Chapel of St. Peter, of early medieval origin but completely remodeled in the seventeenth century, reachable by stairs. The chapel could be the oldest in Celle Ligure: it is in fact mentioned in a notarial deed of 1181.

Going down the Provincial Road 22 (Via Brasi) on foot for 22 minutes you arrive in Piazza Papa Giovanni XXIII where there is the Church of San Giorgio, from the 15th century, which houses a painting by Paolo Gerolamo Brusco from Savona.

About 40 meters from the Church of San Giorgio stands the small Oratory of San Tommaso Apostolo which preserves a wooden group of San Giorgio which pierces the dragon of the Genoese school from 1679 and another similar from 1865, the work of Antonio Brilla.

Near the Church of San Giorgio, take a small dirt path that climbs towards Torre Bregalla and “Case Lassea” (ignoring the itinerary that descends towards the "Sanctuary of Peace"): this is a stretch of the “Liguria Path” that winds through a botanical path, along which various information panels are placed on the main species of the Mediterranean scrub.

The path climbs gently until it reaches Torre Bregalla (261 m), a place where there was a watchtower with a circular base on two floors which was used to defend against invasions by Saracen and Turkish pirates. The tower was demolished by the Germans in 1944. 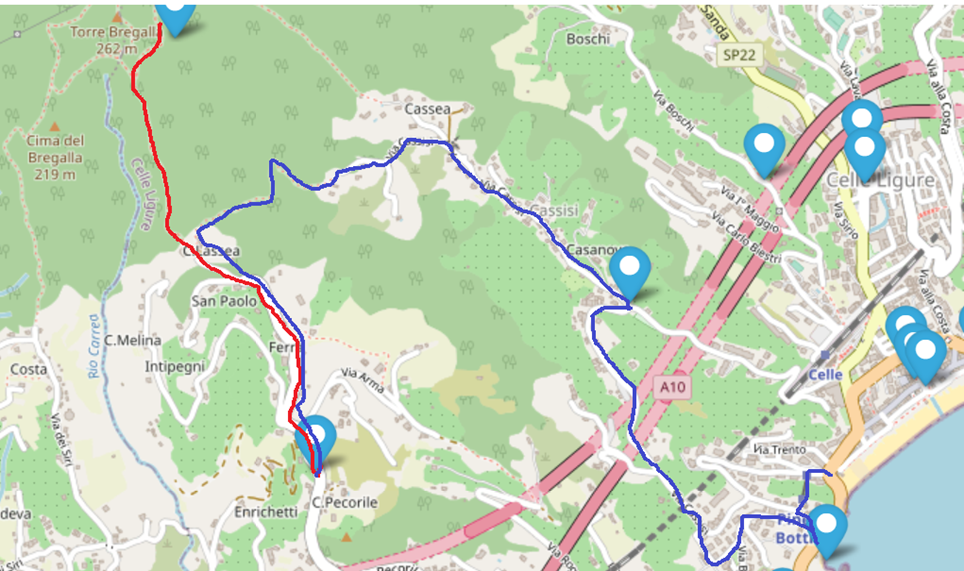 From here the path ("two red dots") descends rather steeply inside the Mediterranean scrub, which occasionally opens up allowing you to admire interesting glimpses of the Ligurian coast. Once in “Case Lassea”, the path returns to have gentler slopes, but immediately the dirt road gives way to the asphalt that will accompany us to the Chapel of Sant'Isidoro and Nostra Signora della Guardia of Pecorile.

The last stop on the route is the Cassisi hamlet. To reach the small church of Cassisi starting from the small church of Pecorile, it is advisable to retrace the path towards Torre Bregalla, until you meet an intersection in the path with the branch towards Cassisi, where you reach the Chapel of SS. Giacomo e Filippo, located in a panoramic position. Even the hamlet of Cassisi has highly suggestive views, such as the "Tower of Babel", an ancient fortress house located on the Cassisi road to protect the path that led to the so-called Tower of Cardamei. This fortress house must have been part of a defensive system dating back to a period between the 11th and 16th centuries, in defense of the Saracen and Turkish invasions.

The itinerary is over and you can tackle the final descent towards the town center; if you still have some energy, we suggest ending the day with a relaxing view of the sea and the village of Celle from one of the benches of Pineta Bottini.